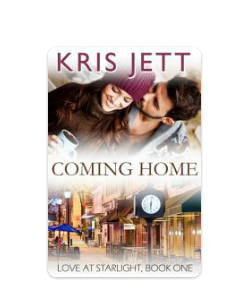 Jessie Foster and her mother are the owners of Starlight Pub in the small town of Snowy Ridge. One day Jason Kirkland, Jessie’s ex-fiance comes back to try to rekindle their relationship. However after being betrayed Jessie refuses his advances and seeks help from an unknown stranger. Enter Cade Stone whose family had lived at Snowy Ridge, comes back with his brothers to start a snowmobile repair shop. Cade was shocked when he was ambushed by Jessie in the pub to be her pretend boyfriend. After Cade’s refusal to help, Jessie got angry but later they became friends.

After the arrival of her ex, Jessie’s two estranged sisters also come back after living in the city for almost four years. Wynn had gotten married and followed her husband to St. Louis, Missouri, apparently having a perfect marriage with a daughter. On the other hand, Luci went to New York to pursue her writing career after she had slept with Jason thus, ruining Jessie’s relationship.

Despite Jessie’s hostility and anger, her mother insists to have all the three sisters work together in the pub. But as Jessie gets to know her sisters better, she realizes there’s more to them than meets the eye. She also gets closer to Cade as they continue to help and encourage each other. Just when the family seems to be coming together, the sisters are forced to put aside their differences and mistakes during their times of crisis.

In every family there are problems. In every family the members make mistakes, especially in the young age. But a time comes when we have to grow up and come back together. We have to learn to adjust to one another. Sometimes we won’t understand why a person does something until years later.

This story is all about learning to be a family. Whatever our nature, whatever our mistakes shouldn’t be allowed to tear the family apart. Otherwise who else would we lean onto in difficult times.