An Accidental Series by Dakota Cassidy 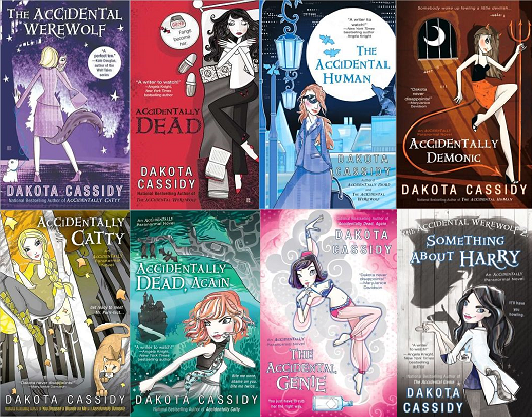 Marty Andrews is a sales rep for Bobbie Sue Cosmetics. Being a fashion fanatic, she along with her assistants, Nina Blackman and Wanda Schwartz, is dedicated to climb the ladder to the highest level of being a sales rep. However, her dreams are dashed when she was accidentally bitten by Keegan Flaherty, a werewolf. This results in her transforming into a werewolf and has no option but to go with Keegan to meet his pack and learn about being a werewolf. After much drama the two of them get mated. After that, Nina Blackman changes her job to assist a dentist. Unfortunately, the first patient she attends on her first day of work bites her while in his anesthetic state. The man, Greg Statleon turns out to be a vampire. Although being stubborn, she soon realizes that she needs Greg’s help and as it turns out, they are perfect for one another. On the other hand, Wanda is diagnosed with a terminal illness yet doesn’t tell her two best friends and continues her job at Bobbie Sue Cosmetics. After placing an ad about a party at her home where she would recruit new “saleswomen”, she’s shocked to find a man at her doorstep. Heath Jefferson, a centuries old vampire comes looking for a job and impresses Wanda and the other women in the party with his sales skills. After Marty, Nina and Heath find out Wanda is dying, they all team up to make sure she becomes immortal in the most unusual way. After being “accidentally” turned into paranormal beings Marty, Nina and Wanda decide to start a support group called Out in the Open Paranormal Support or OOPs to help innocent people who have been unknowingly turned into different entities.

Despite that the stories have some dark violence, due to the paranormal aspect, it is still interesting. That’s because its laced with family drama, romance and humor. Sometimes you laugh, sometimes you feel sad for the characters. However, the best part is of the three best friends sticking together for each other. Being turned into different paranormal beings with different abilities doesn’t affect their friendship. They may bicker and fight with each other but that also shows their love between themselves and their respective partners.

After coming up with the idea of helping other innocent humans, they start their journey into the paranormal world. They encounter many other species of beings such as shapeshifters, demons and genies. But they still have to deal with the same issues as normal human beings experience in life such as betrayal, cruelty and jealousy. However, the more they help others, the more their family grows. Despite everyone being different, they all help out each other whenever needed. That’s the best lesson one can learn from the characters, of being a family filled with love.